Seekers of the lost golden cities #1/4 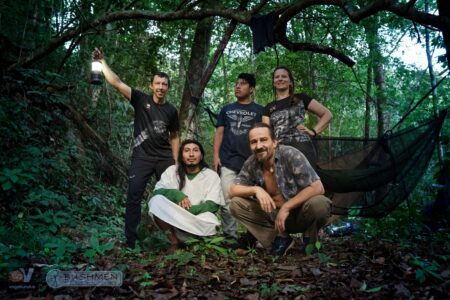 March 2021. The pandemic shut us down in Poland for two years. As soon as some airlines started flying we had to go out into the world. The choice was, to put it mildly, limited. Mexico, and basically nothing else…

It was easy to guess what my esteemed wife was thinking about.

„Listen! There must be more ruins out there. Still undiscovered, somewhere in the middle of the jungle… ones that only the local hunters know about… you just need to find someone who spends a lot of time in the woods.”

Easy to say, harder to do, but luck favors the persistent!

„Mario Chambor? Mario Chambor? Of course, I know him. He’s my cousin (in Lacanja, by the way, you get the impression that there are only cousins there). Ooo… Oooh! That’s him!!!”

Osh jumped out of the car and, waving his arms, blocked the way of an oncoming vehicle. A moment later Aga and Erik were greeted by a man of indeterminate age with a distinctive, flat, Mayan face. 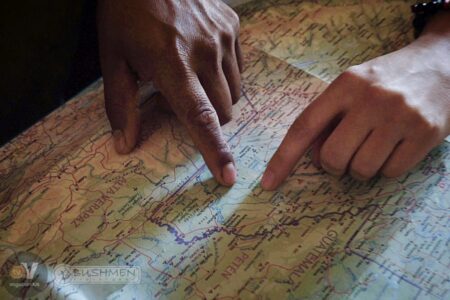 It seemed that this long-haired, short, stocky Indian actually knew something. I don’t know what Aga told him, but Lakandon suddenly dropped to his knees and began to frantically gather up small stones from the road, then arranged them in some random pattern while gesticulating vigorously. I watched this exciting fussing in the dust of the gravel road from behind the steering wheel of our car, and Aga’s face only allowed me to judge that she enjoyed these wild spasms and the scattering of pebbles.

Getting into the car she couldn’t stand it.

„ You kow what! He says there are pyramids there. Four or five. Four are supposedly collapsed, and on one there’s supposed to be something like a gate and there are supposed remains of paintings. He says he canoed down there once and saw it. He was very excited about it in general, and we already have an appointment to have breakfast at his place tomorrow.

Pretty soon it became obvious that Mario was even more excited about the expedition than we were. Unfortunately, a quick assessment of the situation left no doubt. About ten days in the jungle, off the trail, with no way to quickly evacuate as if something went wrong.

Yep. We had about ten times too few memory cards and about twenty times too few batteries. We didn’t have enough calories to carry on our backs into the forest either. Neither did we have any hammocks. We had to, to the great, painful disappointment of our newly met guide, postpone the undertaking until ‘next year’. 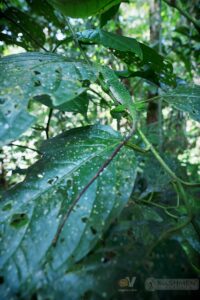 It was one of the longest years of our lives, but exactly thirteen months after those first games of pebbles in the dust of the road, we entered Selva Lacandona with the intention of reaching the ruins that only Mario could find.

If one is to believe the vision of the green hell spread in books by various famous travelers, the jungle is hostile, full of dangerous creatures, toxic plants, and just waiting for our mistake. We walk through it only with a guide, putting our feet where the guide has put his and not touching anything that the guide does not give us.

Ants can eat a man alive if he falls asleep in an unfortunate place, and butterflies have deadly pollen on their wings. Not to mention snakes, scorpions, spiders and other horrors. In a word, we spent our last savings to commit a very fancy collective suicide, but we tried not to think about it. Aga was going in search of her inner Indiana Jones. Eric, to look death in the eye and laugh in its face. Me, because I am “niche” and being aware of excessive proximity to venomous creatures is necessary for my mental balance. Mario, because he could finally tell his wife that he wasn’t going “just wandering in the woods” but “go to work,” and Jeremiah. At the time, we thought Jeremiah was just going to make some money. 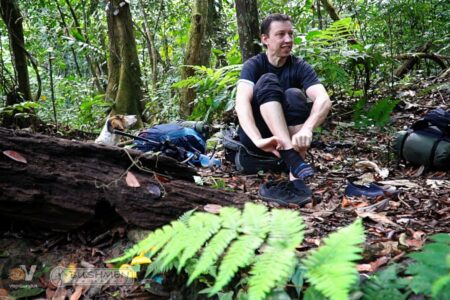 A person literally needs a few things to survive in the jungle. First, regular access to water. Secondly, a few hours of sleep a night. Thirdly, you sometimes need to eat something and fourthly… mosquito repellent.

At the very beginning, the problem was not wading through the virgin forest with a machete in hand, but the multitude of trails and paths crossing the green wilderness. It took Mario a couple of hours to try and find the right path, while we were putting on and taking off our shoes, crossing streams and rivers back and forth.

„Lots of new trails. I don’t remember that one, or this one…” mumbled Mario under his breath as he ran past us.

Jeremiah was following him step by step. Then Erik, Aga and me. The Lakandons were appearing and disappearing, and we were trying to keep up with them. We had to admit that they ran over the mountainous terrain like the proverbial hares. Unfortunately, we did not. At one point, an older man emerged from the bushes on the opposite side of the stream. 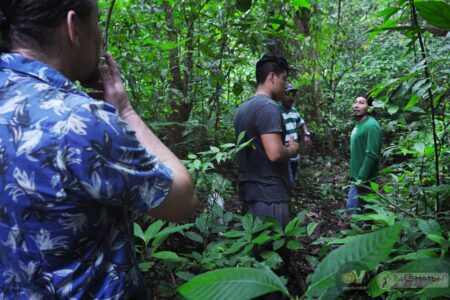 „Mario! Where are you going?”

And they both ran away into the bushes, and we stayed with our shoes in our hands, on the other side of the stream. By the time we crossed the water, there was no sign of our guides.

There was a mass of footprints on the path. A veritable highway. You’d think we were in a virgin jungle…!? Which ones might be their…?

The path that Mario and his new friend had started down forked every so often, but each time only one leg had wet spots on the leaves. I ran another hundred yards or so and came back for the rest. For the next half hour with our noses to the ground we searched for water droplets, freshly broken sticks and twigs. When suddenly Mario emerged from the greenery and asked as if nothing had happened: 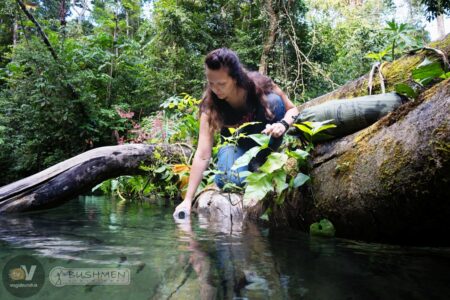 „Where have you been all this time?”

Erik had murder in his eyes.

At one point we found our guides waiting for us by a small stream.

„This is the last water for eight hours,” announced Mario cheerfully.

He forgot to add that the he ment an eight hours Lacandan march. We were moving much slower.

In any case, this was the third time he had said that, and at the previous two streams he had also said that, so we didn’t take him too seriously. We ate our lunch, filled up the bottles and set off in a further joyful chase.

Such a game of tussle and jousting lasted the whole trip. 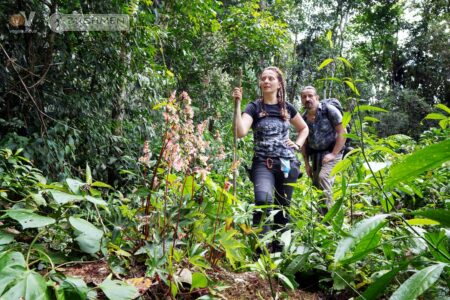 Our water supplies ran out at the end of the first day, but before they ran out, we had a baptism of fire. The path was there, but every now and then with huge trees laying across it, what forced us to climb over huge trunks, or to meander through bushes, if the crown of one of those colossuses happened to be on the trail. The heat was pouring from the sky, and each of us was carrying several kilograms on our backs. After a very short time we were so exhausted that we could only see about a meter of the path in front of us and we could barely drag our feet. 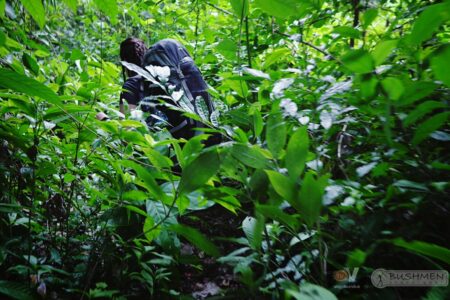 Just a week before, we were sitting behind desks in cold Poland, in a completely different time zone, and the lack of acclimatization did its job. We were all wet and the water was running out at an alarming rate. Sweat washed away all the repellents in no time, so the blood-sucking insects cut us without mercy! In a word, a green hell!

Finally, the horrible moment came when the last lucky one sucked the last sip of life-giving liquid from the bottom of his bottle and the vision of staying overnight with a dry mouth became a fact.

Aga and Eric were still in good spirits.

„How long can a man survive in such conditions without water?”

„Without food, too. Most of what we have needs water.”

„We probably won’t last too long…” 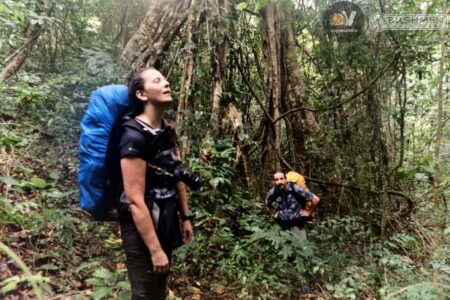 The rest of the day passed with us stumbling over roots in an atmosphere of joyful self-irony. After all, it was only the first day of our trip, and the heroes of the movies don’t die of thirst on the first day. At most on the second day, and not all of them, either, but that was a worry for tomorrow. Now we had to go. Shuffling one foot in front of the other, holding on to the thought that this day must end one day.

„Did you see that? Yeah. It’s a pyramid…” – announced Mario when we caught up with him again. In fact, the hill on the left was characteristically steep and symmetrical, with big stone blocks all around. „That’s where we’ll sleep. On top! In the jungle, you sleep on the top.”

The vision of climbing “up there” seemed horrible, but what was to be done? Mario seemed extremely serious when he talked about this sleeping on top… 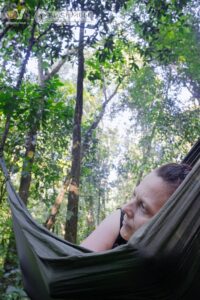 By the time I saw the top, Mario and Jeremiah were already sitting sprawled out and enjoying a red liquid from a big plastic bottle. It turned out that Jeremiah had been puttering around in his jute sack with two liters of hamaica throughout our ordeal. We were ready to hug him for it. The taste of the sweet and sour hibiscus drink was wonderful. Mostly because it was so wet…. Of course we prudently drank only one liter and left the rest for breakfast. After all, we are old hands :P

To be honest, I don’t really remember setting up the hammock. I think it went easy, even though we were unconscious from fatigue. I just remember my  BUSHMEN® hammock swaying slightly under me and me nursing the last sip of hamaica in my mouth with the happy thought that here those damn mosquitoes won’t reach me anymore!

copyright© for the translation: Juliusz Wojciechowicz 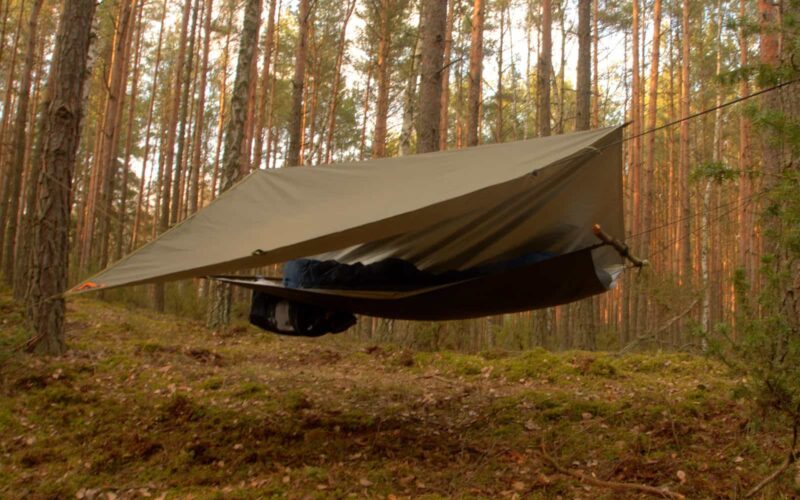 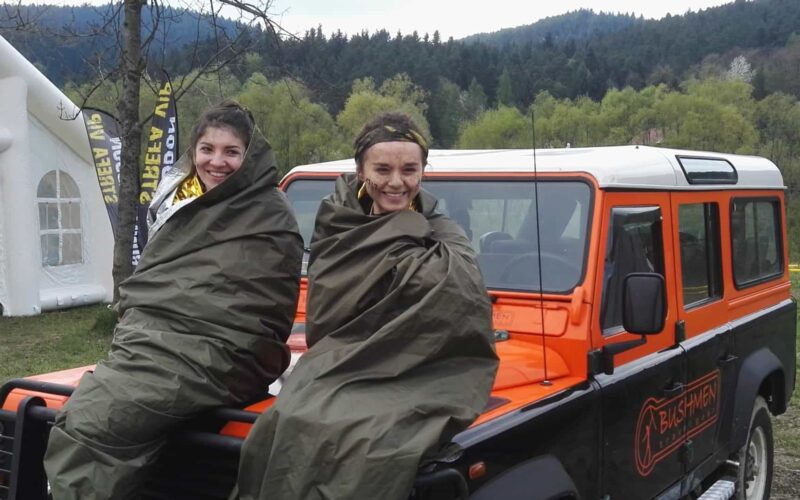 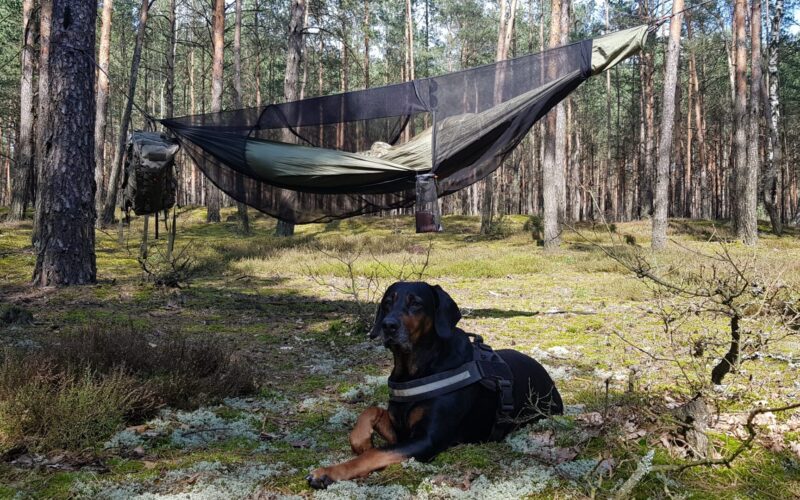 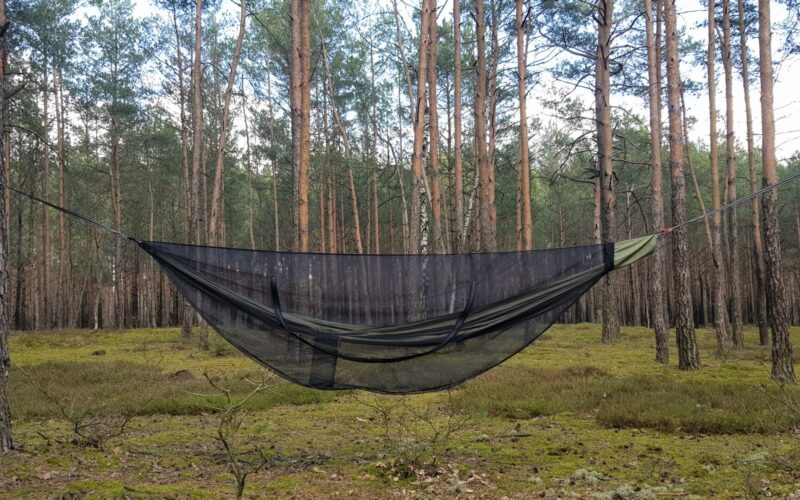 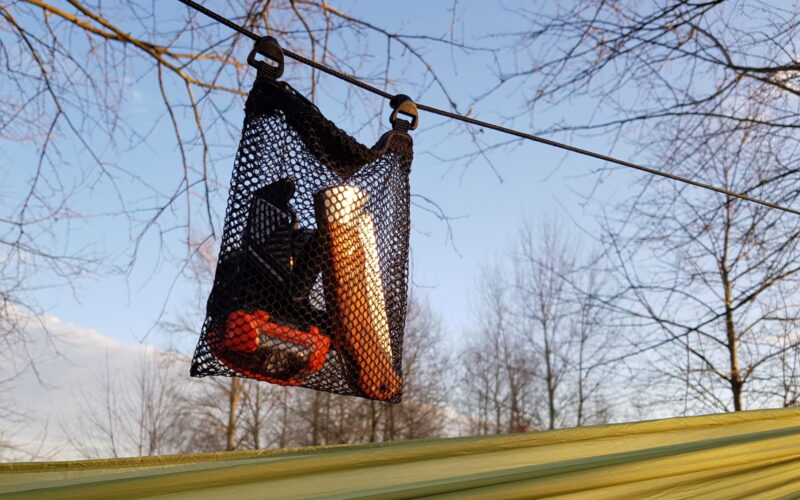 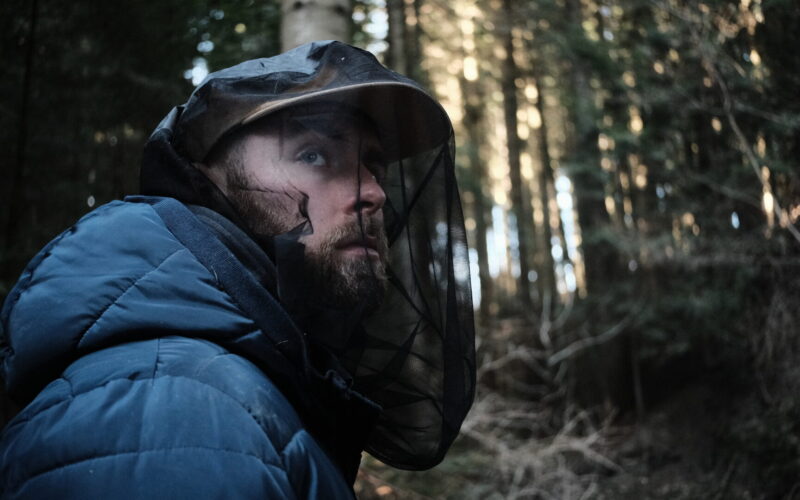 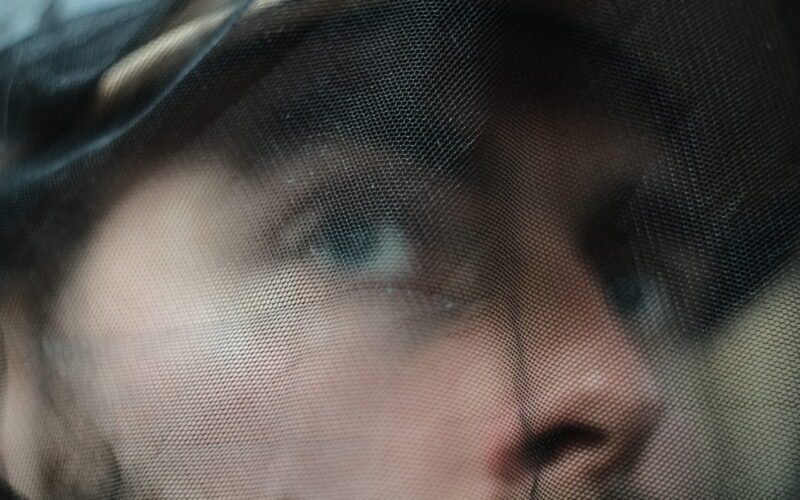